How has cancer changed your life for the better?  We want to feature your story.

Hello! My name is Janelle, a.k.a. The Sassy Survivor (at least I like to consider myself to be). The Sassy Survivor began as a mission to share my story to the world on how dealing with cancer really is. This story began with being diagnosed at the age of 27, with stage 2 ovarian cancer. Seeing me in such agony, my husband forced me to go see another doctor to figure out what the heck was going on with me. This visit, lead me to having a CT scan. Unfortunately, these result
96 views0 comments
Connie Scheel

{K}ancer Evicted Me From My Original Life

My journey through Ovarian Cancer led me into a wonderfully uplifting business, thanks to my oldest niece, Zoey. Her mom was in college when she was born in 2006, and I got to shower Zoey, the first of her generation, with care, love and affection—I fell in love with being an Aunt! While living in beautiful Naples, Florida enjoying the beach lifestyle, a nurse practitioner saved my life by realizing I had a cancer symptom—a thickened lining of the uterus. When I was diagnos
83 views0 comments
Shannon Routh

They have circled social media. Maybe you have seen them and maybe you have not. If not, you are in for a treat. Have a look as a few {k}ancer patients break it down. Not only will you see the patients giving it their all but you get a glimpse into the nurses and staff that make this journey bearable. We love our Nurses!!!! #joy #InfusionDances #OncologyNurse #SURVIVORS
10 views0 comments 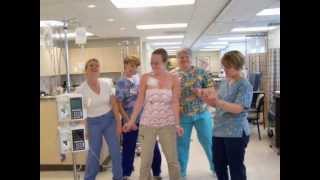 I wanted to first say Thank You to Shannon Routh aka Teal Diva whom God put in my path for a reason. I’ve watched Teal Diva grow over the years and I couldn’t be more proud!!! Thank you for allowing me this opportunity to share my story. Ovarian cancer is known as the silent killer. It is the deadliest of all the “women’s” cancers. 1 in 72 women are diagnosed with ovarian cancer. In 2008 my sister Judy was the one. She was the oldest of 7, a wife of 20 plus years, mother of 2
207 views0 comments
Hope Aguilar

I had stage 3c and it was the most common type, epithelial. I was 40 years young and though the prognosis didn’t look very well—I looked eight to nine months pregnant by time surgery came around. They removed eight liters of fluid while I underwent the total abdominal hysterectomy. Fortunately, I had an amazing gynecological oncologist who took very good care of me. I personally believe having a doctor who specializes in gynecological cancers is best suited for handling such
18 views0 comments
Diane Riche

On April 21, 2010 life seemed “normal”, until I found my mother laying on her living room floor, confused and hallucinating. We called 911 and took her to the emergency room. After four long hours of waiting and wondering, we got a diagnosis…a metastatic brain tumor. Everyone assumed it was a result of her breast cancer returning 8 years later. A few days following the surgery to remove the tumor the pathology came back. It was NOT breast cancer but was in fact ovarian cancer
111 views0 comments
Kim Swearengin

Ovarian {K}ancer Did Not Take My Life, So I Owe It To This Life To Live It To The Fullest.

In the beginning of this journey, I realized that there were so many things I have not done that I would love to do. I made myself a promise that if given the chance, I would do just that. Mentally, I made a list of some things I would like to do. Now, it is up to me to do what I can and live this life to the fullest. {K}ancer sorta makes us want to do this more than ever before. In early spring 2016, after over 2 years and 36 chemo treatments of Taxotere and Carbo, I had
383 views0 comments
Zachery Eddinger

At the end of May in 2006, my grandmother became ill and could not shake it. She told me she felt like her stomach had been upset and she was feeling bloated. Within a few days she asked my mom to take her to the hospital. The doctors decided to admit her for more testing and scans. A few days went past and we received the worst news we could have imagined....cancer. It was not until we saw her a few days later that we were told it was ovarian cancer. In the mean time, I had
39 views0 comments
{"items":["5f04c9d0afd8db00174e7574","5f04c9d0b4377c0017d42513","5f04c9d0a5beab0017774d77","5f04c9d0c0d5f90017991e7b","5f04c9d052ba6d0017ea049a","5f04c9d097c60e0017e6da8b","5f04c9d0864d9e0017650afb","5f04c9d0c0d5f90017991e7c"],"styles":{"galleryType":"Columns","groupSize":1,"showArrows":true,"cubeImages":true,"cubeType":"fill","cubeRatio":1.3333333333333333,"isVertical":true,"gallerySize":30,"collageAmount":0,"collageDensity":0,"groupTypes":"1","oneRow":false,"imageMargin":32,"galleryMargin":0,"scatter":0,"rotatingScatter":"","chooseBestGroup":true,"smartCrop":false,"hasThumbnails":false,"enableScroll":true,"isGrid":true,"isSlider":false,"isColumns":false,"isSlideshow":false,"cropOnlyFill":false,"fixedColumns":1,"enableInfiniteScroll":true,"isRTL":false,"minItemSize":50,"rotatingGroupTypes":"","rotatingCropRatios":"","columnWidths":"","gallerySliderImageRatio":1.7777777777777777,"numberOfImagesPerRow":1,"numberOfImagesPerCol":1,"groupsPerStrip":0,"borderRadius":0,"boxShadow":0,"gridStyle":1,"mobilePanorama":false,"placeGroupsLtr":true,"viewMode":"preview","thumbnailSpacings":4,"galleryThumbnailsAlignment":"bottom","isMasonry":false,"isAutoSlideshow":false,"slideshowLoop":false,"autoSlideshowInterval":4,"bottomInfoHeight":0,"titlePlacement":"SHOW_ON_THE_LEFT","galleryTextAlign":"center","scrollSnap":false,"itemClick":"nothing","fullscreen":true,"videoPlay":"hover","scrollAnimation":"NO_EFFECT","slideAnimation":"SCROLL","scrollDirection":0,"scrollDuration":400,"overlayAnimation":"FADE_IN","arrowsPosition":0,"arrowsSize":23,"watermarkOpacity":40,"watermarkSize":40,"useWatermark":true,"watermarkDock":{"top":"auto","left":"auto","right":0,"bottom":0,"transform":"translate3d(0,0,0)"},"loadMoreAmount":"all","defaultShowInfoExpand":1,"allowLinkExpand":true,"expandInfoPosition":0,"allowFullscreenExpand":true,"fullscreenLoop":false,"galleryAlignExpand":"left","addToCartBorderWidth":1,"addToCartButtonText":"","slideshowInfoSize":200,"playButtonForAutoSlideShow":false,"allowSlideshowCounter":false,"hoveringBehaviour":"NEVER_SHOW","thumbnailSize":120,"magicLayoutSeed":1,"imageHoverAnimation":"NO_EFFECT","imagePlacementAnimation":"NO_EFFECT","calculateTextBoxWidthMode":"PERCENT","textBoxHeight":0,"textBoxWidth":200,"textBoxWidthPercent":50,"textImageSpace":10,"textBoxBorderRadius":0,"textBoxBorderWidth":0,"loadMoreButtonText":"","loadMoreButtonBorderWidth":1,"loadMoreButtonBorderRadius":0,"imageInfoType":"ATTACHED_BACKGROUND","itemBorderWidth":2,"itemBorderRadius":0,"itemEnableShadow":false,"itemShadowBlur":20,"itemShadowDirection":135,"itemShadowSize":10,"imageLoadingMode":"BLUR","expandAnimation":"NO_EFFECT","imageQuality":90,"usmToggle":false,"usm_a":0,"usm_r":0,"usm_t":0,"videoSound":false,"videoSpeed":"1","videoLoop":true,"jsonStyleParams":"","gallerySizeType":"px","gallerySizePx":978,"allowTitle":true,"allowContextMenu":true,"textsHorizontalPadding":-30,"itemBorderColor":{"value":"#00B2B0"},"showVideoPlayButton":true,"galleryLayout":2,"targetItemSize":978,"selectedLayout":"2|bottom|1|fill|true|0|true","layoutsVersion":2,"selectedLayoutV2":2,"isSlideshowFont":false,"externalInfoHeight":0,"externalInfoWidth":0.5},"container":{"width":978,"galleryWidth":1010,"galleryHeight":0,"scrollBase":0,"height":null}}